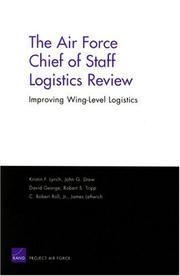 Table of contents for The Air Force Chief of Staff logistics review: improving wing-level logistics / Kristin Lynch. Bibliographic record and links to related information available from the Library of Congress catalog. Contents may have variations from the printed book or be incomplete or contain other coding. In response to indicators of declining readiness, heightened operations tempo, and evolving force employment concepts, the Chief of Staff of the Air Force (CSAF) initiated a review of Air Force wing-level logistics processes. This review, called the Chiefs Logistics Re- view (CLR), was designed to target process and process-enabler short falls that limited the logistics community's ability to Cited by: 2.   The Air Force Logistics Management Agency, with headquarters at Maxwell Air Force Base Gunter Annex, Ala., is a field operating agency that reports to the Director of Transformation, Office of the Deputy Chief of Staff for Logistics, Installations and Mission Support, Joint Base Andrews, Md. Gen. Charles Q. Brown, Jr. is Chief of Staff of the Air Force. As Chief, he serves as the senior uniformed Air Force officer responsible for the organization, training and equipping of , active-duty, Guard, Reserve and civilian forces serving in the U.S. and overseas.